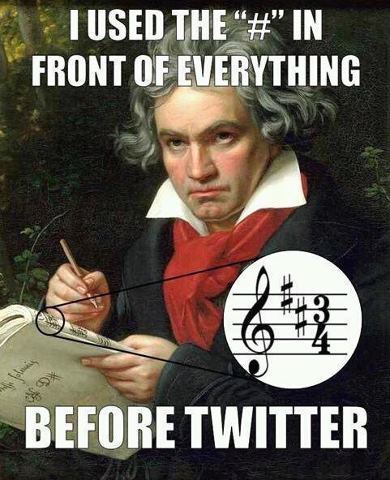 One of the surest ways to expose yourself as a social newbie is to use hashtags incorrectly. Take a moment and visualize this. When you use hashtags in a boldly incorrect way, you appear in the online world like the drunk guy dancing at the wedding; yearning for attention “look at me!, look at me!”. You think you’re cool, but you really look silly. Just like social graces in the real world, there is an unspoken manner of engagement in cyber world. Those cool little tic-tac-toe sharpies for example are governed by a bit of online etiquette. Ever been to a formal dinner and witnessed someone proudly tuck their napkin into the neckline of their shirt like a neanderthal? Slurp their drink? Begin eating their salad with their desert fork? Or what about the ones who try and convince you that belching out loud is the sign of a good meal or some other fortune.

Smart business owners use hashtags effectively. Jay-Z, Adam Levine, Scarlett Johansen, and a long list of celebrities use hashtags too. They’re famous — they can pretty much do whatever they want and appear cool, but for everyone else —> learn how to use hashtags properly!

People have jumped on the cool bandwagon hashtagging #rainintheforecasttoday #differentfartsmells and full on sentences like #iloveitwhenthestorehasmyshoesize. They have gone hashtag crazy, shoving them down our throats every chance they get. This SNL short emulates these digitally uncultured marauders perfectly.


If you are not using hashtags publicly, then why are you using them at all? The whole point of hashtags is to group similar information to an idea or cause so that a tremendously large group of people can easily find that information.

So what is the right way to use hashtags?

First off, do you know what the hashtag you want to use actually means? Don’t make any assumptions; make certain you’re absolutely clear on what the hashtag conveys, and that you’ve done some research to see if it’s original or what comes up when you use it. Find out what it means to its intended audience and any subtextual clues that you may be missing. Looks can be deceiving, so if you’re even slightly in doubt, don’t hesitate to do some research before you make a commitment. There’s no better example of how this can blow up in your face than DiGiorno’s tweet, which used the hashtag #WhyIStayed to promote its pizza. On the surface, the hashtag looks innocent enough, but again, you can’t make that assumption. The hashtag was actually being used by survivors of domestic abuse to raise awareness and support for other victims—making DiGiorno’s marketing stunt appear insensitive and offensive, not to mention foolish.

Is the tag (or tags) you are using relevant to your post? It should be, and it should be obvious. Is your hashtag clear, or does it require people to figure out some sort of cryptic message? One word hashtags are nearly always guilty of being cryptic. Why not just state your message with a clear hashtag or add additional ones to convey a clear message, instead of keeping the world guessing?

You should consider how your personal (or business) identitity uses hashtags. For example, let’s say you’ve found two or three hashtags that genuinely fit your intended message, and you commit them to a single post. This is fantastic. But what happens if you use those same hashtags again in your next post? And the next one? And the one after that? Reusing the same hashtag strategies over and over can also turn your audience off, so be sure to switch things up and keep it fresh.

The Most Important Question: Are You Using Hashtags for Hashtags’ Sake?
There’s one big question you need to answer. Are you using hashtags just for the sake of using hashtags? This is probably the biggest characteristic of a social newbie. That is; are you without clear direction or strategy, and only capitalizing on the idea of hashtags because you think it will support your personal (or business) identity? If so, you need to take a step back. Hashtags can be valuable, but only if you use them appropriately and strategically.