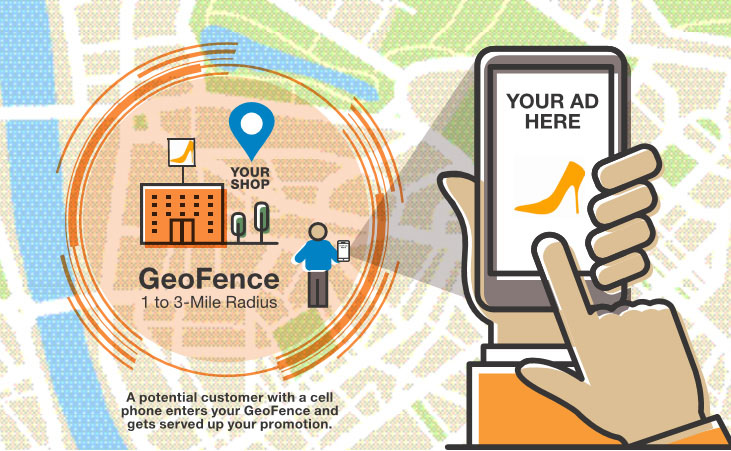 CSI’s Geo fencing and addressable (household) geofencing technology can give advertisers the competitive edge they’ve been looking for and that none of their competitors are using.

Location Based Advertising (Geo-Fencing)
Our Beacon Free geo fencing technology allows companies to target people based on their physical activities. We can build your geofences where your customers are, not where you want them to be.

Whether it’s a particular event or a physical building you want geo fenced, this can be a powerful mechanism to serve ads to individuals based on their physical location.

Our Geo fencing and addressable (household) geofencing technology can give advertisers the competitive edge they’ve been looking for and that none of their competitors are using. S

Trade Show Exhibitor who wants to advertise at an event

Car dealership who desires to target their competitor dealerships and measure foot traffic back to their showrooms.

Retailer or franchise wants to run a customer loyalty program, so they build geo fencing around their own stores to drive repeat customers.

There are Many Ways To Use Geofencing Marketing

How Geo fencing Advertising Works
A virtual geofence is traced around an event location where the advertiser wants to build an audience based on their visit to that particular location during a set, scheduled timeframe. When people enter the geo-fenced location during the set timeframe, they will then become a part of an audience that can later be targeted following the event.

As the user visits various apps downloaded on their phone (Angry Bird, Weather Channel, Emoji Keyword, Words With Friends) or browses the internet on the mobile browsers, they begin to see ads from said advertiser. User can see those Ads for 1 day and up to 30 days after he/she has entered the geo fence.

Via what we call geoframing, we can even reach users who have visited those same locations in the past two years. Geo fencing marketing is the perfect solution for people that want to target a group of people attending a specific event and get more reach out of their ad spend rather than simply zip code targeting or city-wide targeting beit New York, Chicago, Washington DC, Los Angeles, Miami FL, or even Atlanta, GA.